I arrived in Caracas after two weeks in Cuba and I set myself two days for recovery before continuing to Colombia. I basically stayed most of the time in the parent house of my friend Daniella because I didn’t have that much motivation to leave the house. Caracas is the capital of murder and a beer values more than a life of a person. I only went out once with a friend of Daniella  and some friends I met on my Roraima trip, but only because they had a car and could drive me. I left Caracas with a direct night bus to Santa Marta after I almost died while watching the Champions League semifinal between Bayern and Madrid and after my friend Yoan from the Roraima trip gave me a ride while we passed the slums of Caracas. Each day more than 20 people die there because of murder. Inside the bus the driver recommended us to shut down the curtains to low the risk of bus kidnapping. But not the criminals were taken the money from us, the police did. They stopped our bus three times on the last hundred kilometers before the border and wanted to check the luggage. Of course it would take too much time, so people collected money in the bus to pay the police not to check the luggage. So basically the police stopped us only to get some money from the bus passengers. Before we reached the border we had to pay on a weird police stop an exit fee of around 10€. It took ages to get through this and I felt very unsafe because of several suspicious guys hanging around there. I was happy when we finally crossed this border, which has the reputation of the most dangerous border in South America and I found myself in a single room in Santa Marta, Colombia. 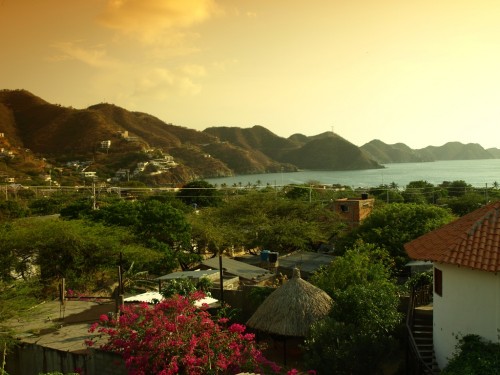 I stayed in Santa Marta and its small fisher village Taganga for 3 days to rest, go to the beach and some party before I packed my stuff for a trip I was a long time dreaming to do: The 5 days jungle trek to the Lost City, to Ciudad Perdida. And because of the famous Tayrona national park was on the way to the lost city, I planned to connect these two trips, to stay two days there which made it in total one week in the nature, with almost no electricity, of course no internet, hammocks two sleep and cold river water for showering. 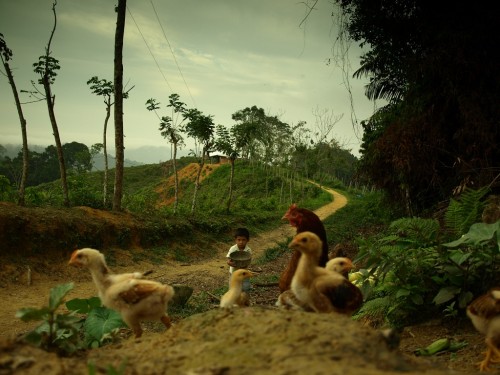 The lost city trek was very cool. The start was not that perfect, because our jeep was running out of gas and the driver had to walk to the next village to buy new one…  We’ve been a group of 11 people, 3 Americans, 3 Irish girls, 3 people from Great Britain and one guy from Argentina. The group was somehow nice but the three girls from Ireland where horrible. Screaming a lot, being afraid of almost every animal including cats and dogs, listening to their Ipods instead to the sound of nature and finally they where super ugly. If only the half of the Irish women are like that, I don’t see any reason to stay there for I while and I ask myself how my brother and my cousin could live there so long… 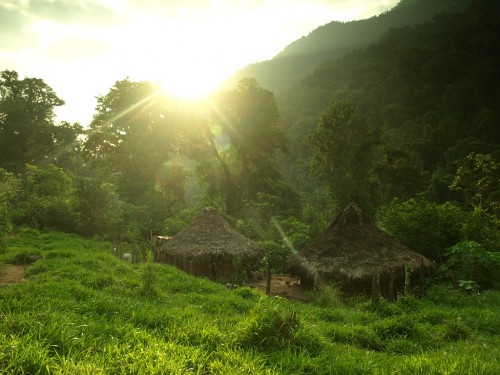 Anyways the trip was totally 45 kilometers long and we did everyday tranquil hikes that everyone could manage the trek without any problems. Some mountains were very steep and the humidity of 100% made us sweat like we never sweat before after climbing the mountain only 10 minutes. For that we almost took every river bath we could take to take a nice refresh while our guides provided fruits and fresh juice. After the first night in the hammock I thought we will spend the next nights like that, but the next 3 camps had beds with mosquito nets which made the recovery better than I expected before. Also the meals the guides cooked for us where perfect, that I had a better alimentation than when I am traveling normally. We hiked 3 days through farming hills and rain forest before we reached the base camp of the lost city. The fourth day we hiked to the top to visit the hundreds of terraces which had been discovered in 1973. The place is secured of a battalion of 30 soldiers of the Colombian army to avoid that people rob the graves or tourist get kidnapped. I felt secure with my “personal security” even if the place would look better without army. 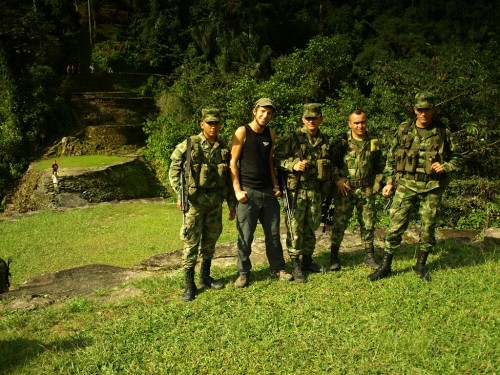 To reach the city we had to climb in total 1800 stairs through the jungle which let us sweat again and which let us feel like Indiana Jones. The city itself was not sooo special but together with the 3 days sweat we need to reach this place and the awesome mountain scenery we had some very cool moments in the lost city. 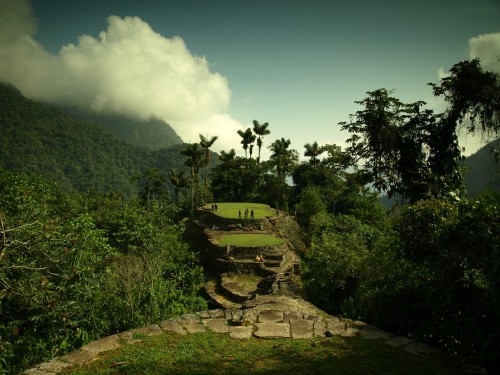 On the same day we hiked to another camp and on the following day to the starting point. This day should be quite hard because I planned to go to the Tayrona National Park and we already hiked 15KM. At least we got a last very good meal and we observed a snake which was eating a frog. After that we needed almost two hours via rough treks and dangerous mountain roads before the jeep arrived at the park entrance and let me out to my two days in the park. I said goodbye to the group, was happy to be far away from the annoying Irish girls and hike with my 26! KG backpack to the park entrance. 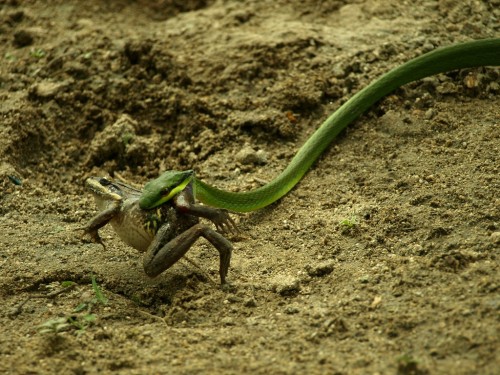 Luckily I got a ride for the next 4KM until the point no cars can enter the park anymore. I said no to the cowboys who offered me to use the horseback to transport my luggage and who gave me a smile afterwards, probably they thought “crazy tourist, wants to hike with this big backpack the next 4KM to the first camping”. But I did it and it was not easy because the road was sometimes not easy to be hiked and with this huge backpack it doesn’t make it easier. At least I got an awesome beach scenery, because my camp was right next to the beach. I put my hammock on the ropes (Yeah I could use my hammock which I carried the last 4 weeks without using once) and went to the beach. Unfortunately I could go for a swim, because this beach was very dangerous and already more than 100 people died in the strong current. I wanted to hold the promise I gave to my mother, to come back healthy, and avoid the swim, which was not easy at all. I went to bed quite early because I was dead of the day and I caught a small cold from the lost city trek. 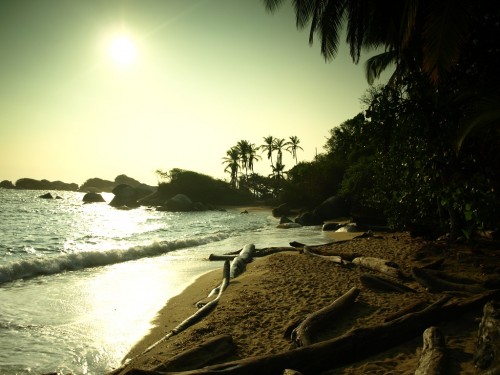 The next day I stand up at 5:30, like almost every day before in the jungle. If you go to bed so early because of the miss of light, you can be very awake even on this time. I carried my heavy backpack the next 4KM to another camp with a swimmable beach and hike without big backpack to some small ruins, 90min from the camp. I had to climb several times and after I was shocked by an appearing snake, I was a bit worried to arrive at the ruins without any damage. But like always in this trip luckily nothing happened to my, only my cold was tiring me. The rest of the day I chilled on the beach on in my hammock and prepared myself for the hard 8KM hike back to the road, from which I wanted to continue to Cartagena, Latin Americas most romantic city and from there finally back to civilization…. 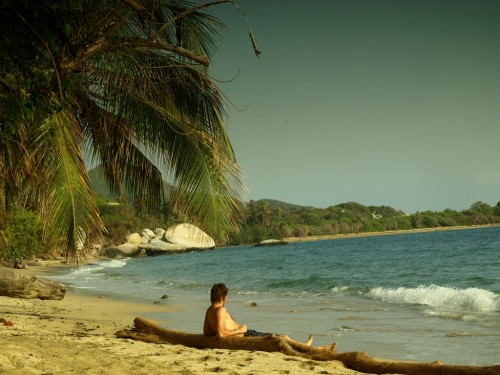 More picture can be find here.